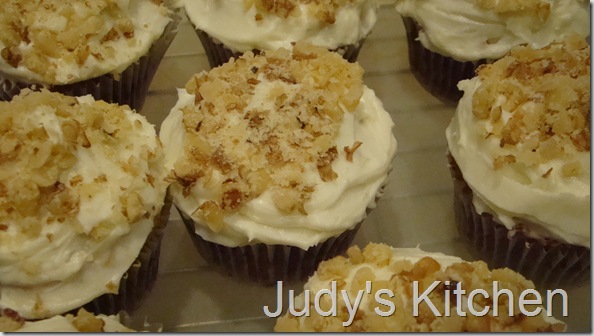 Banana cake or bread is not one of my fave things to make or eat.  I can’t tell you why.  It’s just kind of okay for me.  But my fussy hubby is insane about all things banana.  Maybe it’s from his years of working on the Island of St. Lucia, where bananas abound.  Occasionally there would be a “banana glut,” from a surplus of the crop.  Bananas would be everywhere, free for the taking.  My first trip to St. Lucia found me filled with anticipation of a bite of a really “fresh” banana, which I thought had to be better than our grocery-store varieties.  Not so.  A fresh banana tastes exactly the same as bananas picked green and ripened enroute or in a grocery store.  Each night at dinner, Guy would urge me to order bananas flambé for dessert, which I finally did; but I never enjoyed it as much as he did. 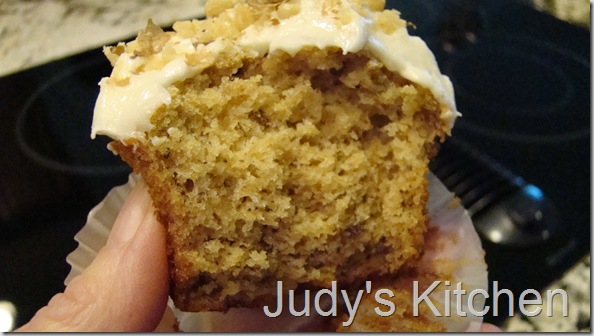 Many years ago, I latched on to a banana-nut cake recipe from a Pillsbury cookbook.  Because the recipe is so good, I stuck with it and still make it, though I’ve made some changes, as noted below.  Since ripe bananas are a rarity in our home (my hubby eats bananas usually before they’re ripe enough for a cake), this cake doesn’t get made too often.  But our local Harris Teeter recently had bananas half-price ($.34/lb.), so I overbought.  Even so,  only  two bananas remained that were over-ripe; but that was enough for this recipe.  Instead of a layer cake, I decided to make 1 dozen standard-size cupcakes and a small (4” x 7.5”)loaf.  The cupcakes were frosted with cream cheese frosting and sprinkled with toasted chopped walnuts.  The loaf was left plain.  And my hubby is happy. 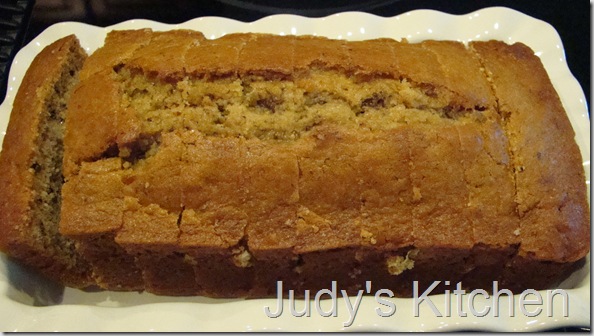 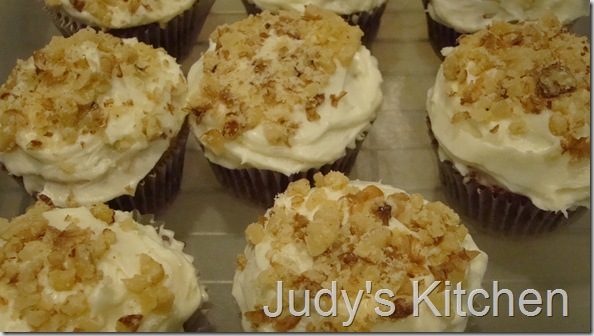 Judy these look georgeous and yummy! Have a wonderful Easter, gloria

The men in my house love bananas too. My toddler eats at least two a day:D
Love one-bowl recipes.

These look so apart & truly wonderful too!

Perfect. I too am kind of hum ho about banana bread...unless it is a REALLLLLLLLY good recipe...like my mom's ..grin! But the husband loves to have a slice in his lunch. Why not try muffins? I am going to go and do this immediately. Happy Easter...

Lovely nut cake Judy. I hope you and your family have a wonderful weekend.
Sam

Looks yummy. Just waiting for the bananas to get ripe.

Judy...thanks for the muffin recipe. I featured you on my cooking blog today. Come on over..grin...hope I linked you correctly.

Hi Judy, u have a fabulous kitchen dear where I can find a big treasure of baked stuff. The one bowl cakes sounds amazing especially as it has buttermilk in it. Nice texture.
Do drop by and check out my space when u get time.
Pari
http://cooking-goodfood.blogspot.com

Oh Judy, your banana muffins look delicious, even for me that do not care for banana :-) But my husband will adore them ;-)

looking good muffins ...thanks for sharing .

I have three over ripe bananas that I need to use up so, I'm gonna whip up a batch of these. Thanks for the various pan size baking times...very helpful.
~ingrid

Once again, another winner recipe. I made it with all of your changes and it is great! My husband can't stop eating it and some single guys came over, so I packed some up to give to them...DH said (in front of them, by the way) "What, you're giving them that much?!" Haha. We love it! Thanks!

Christy, I really appreciate the feedback. Glad you liked this recipe as much as we do.