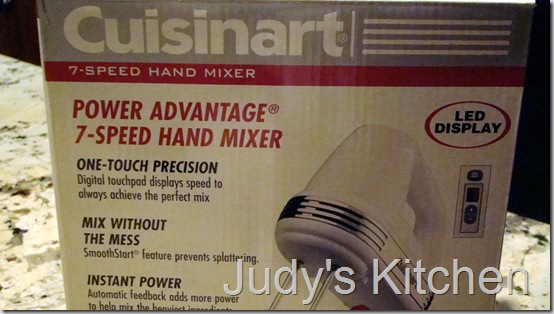 Recently,  CSN Stores representative Sean Ryan asked me to review a product from one of their many sites.  I chose the Cuisinart Power Advantage 7-speed hand mixer, for sale at CSN for $49.85 with free shipping.  It came with an instruction booklet, 2 general-purpose beaters and a whip.  There was no storage case. 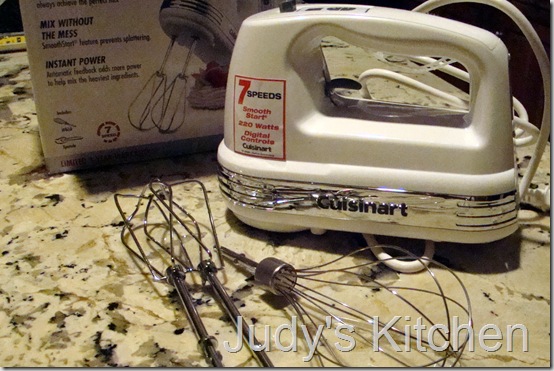 I own a 450-watt Kitchen Aid mixer that I use for most mixing jobs, but the 5-quart mixing bowl is quite large for smaller batches.  It’s nice to have a hand mixer available for smaller batters.

The Cuisinart 7-speed mixer has a powerful motor.  Though the advertising says it has a smooth start, in reality there is a little “jump” when the motor first starts.  If you have flour or powdered sugar that hasn’t been mixed in, it could splash out of the bowl, so it’s best to try to work it in slightly before you start the mixer.  In spite of that, I still love this mixer.  The beaters snap off easily and are a breeze to clean by hand or in the dishwasher.  It mixes batters smoothly and well and it’s comfortable to  hold.  The cord is adequately long.
Because of the “jumpy” start, I only rated this product 4 stars out of 5 on CSN’s website.  However, I would recommend this product to anyone wanting to find a good, reliable  hand mixer for about $50.00.
Posted by Judy at 10:00 PM 8 comments: 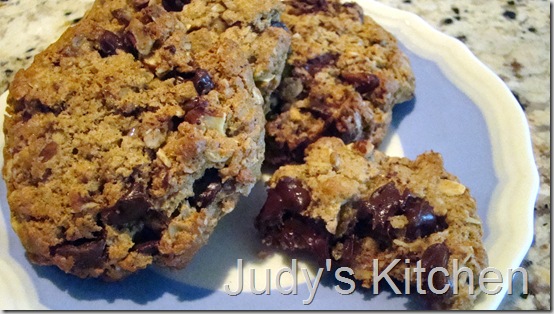 Have you heard of monster cookies?  Paula Deen makes them, and so does the Pioneer Woman.  They’re loaded with peanut butter, MandM’s, nuts, chocolate chips, and just about anything you can think of.   What’s interesting about monster cookies is that most versions have no flour, just oats. 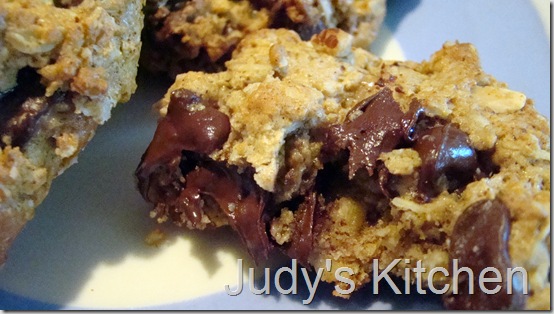 Well, this is my almond butter version, actually a compilation of several recipes plus my own tweaks.   And instead of calling them monsters, I’m calling them beauties, not because they’re particularly attractive, but because I like them.    In fact, I’m amazed at how much I like them.   They are a gluten-free whole-grain cookie.   The edges are crispy-crunchy, the insides are soft and chewy, and they’re not overly sweet.   I can tell you they are going to be one of my go-to cookies from now on, not just because they’re a slightly healthier cookie, but  because they don’t taste like a healthy cookie.  Don’t get me wrong.  I know they’re not really healthy, they’re a sweet treat.  But, comparatively speaking, they’ll do less collateral damage than the real thing, yet they’ll satisfy. 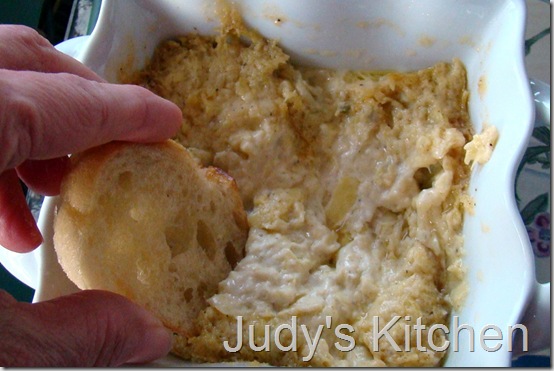 Want an easy but delicious appetizer?  Try this artichoke dip.  Served with slices of toasted French bread, everyone will love it.  You can make it as spicy as you like by upping the hot paprika, or you can even add some diced jalapenos.  This was perfect as is for all of us. 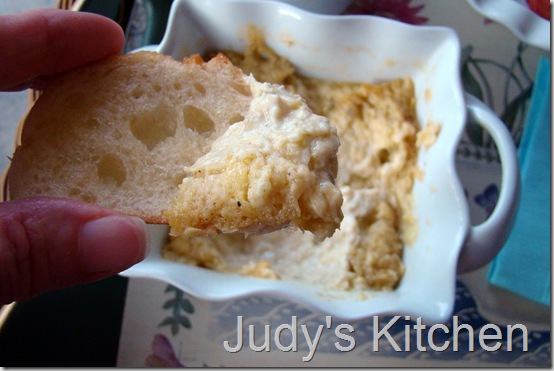 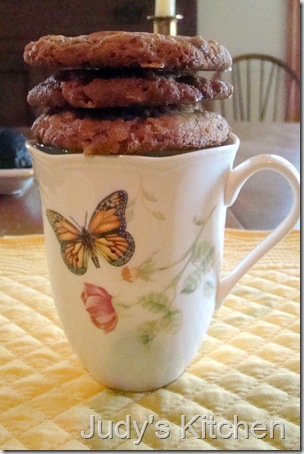 Here’s a sturdy cookie that’s crispy on the edges and tender, slightly chewy, on the inside, with distinct almond flavor from almond butter, almond extract and Heath bar bits.  A combo of flours provides interesting texture.  You’ll get about 16 largish cookies, about 3 – 3-1/2” in diameter. 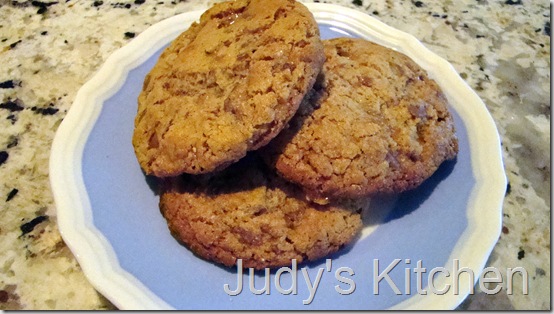 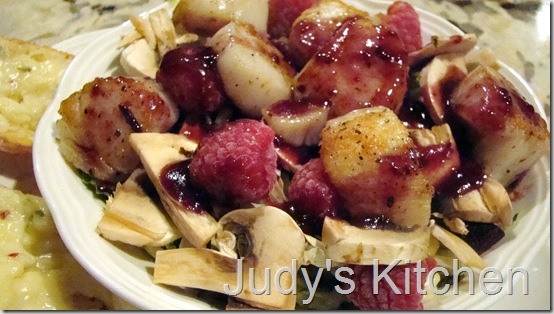 My days of eating fish 5-6 times per week have ended since I learned that my mercury count is too high.  I’m on a detox program to bring my mercury count down, and I’m eating less fish.  How I miss it!

What I miss most is the salmon, my favorite fish of all.  Thinking it was good for me, I was eating it several times a week and savoring every morsel.  Then I learned that wild-caught salmon, which is what I was buying at my local Harris Teeter, is not the same as wild salmon.  Wild-caught salmon is actually spawned and grown in a fish farm, then released into the wild right before it’s caught.  That gives them the right to label it “wild-caught salmon.”  Clever, huh?  Or should I say, devious?

Real wild salmon is available online, but it costs considerably more than the price I was paying for wild caught.  So, you might ask, what’s the big deal?  Farm-raised salmon is higher in mercury and contaminants than wild salmon, and it’s also higher in Omega 6’s instead of Omega 3’s.  So the fish that I thought was so healthful, in fact, is not.  It’s more part of the problem than the solution.

My  fish this week was sea scallops, which are naturally low in mercury, as are shrimp, crab,  flounder and tilapia.  I simply seasoned the scallops with salt and pepper and seared them in a hot iron frying pan with just a touch of olive oil in the pan.  Chopped Romaine lettuce and escarole were topped with roasted sliced beets, shredded zucchini, sliced mushrooms, raspberries and the scallops.  The raspberry vinaigrette was drizzled over top (see top photo).  But any combo of greens and veggies will work.  In the photo below, I used Romaine lettuce, leftover cooked peas and mushrooms, radishes, olives, raspberries and toasted sliced almonds, for a non-meat, non-fish lunch.

QUESTION:  How much fish are you eating these days?  Have you had your mercury levels checked? 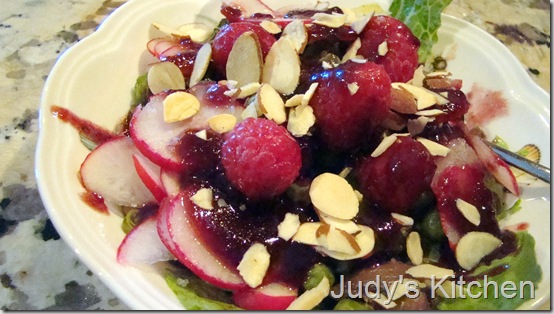 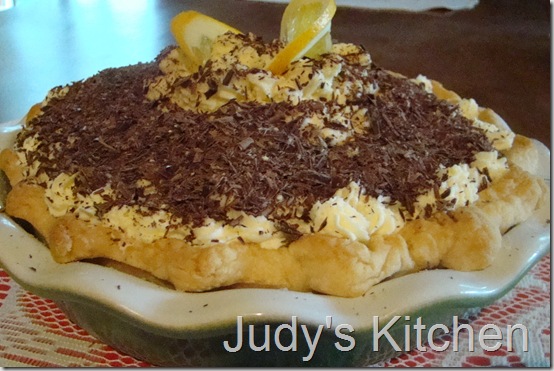 Recently, I received an Emile Henry 8” pie dish, compliments of CSN Stores.   Almost immediately after the pie dish arrived, I found out that Emile Henry was sponsoring a “How Pretty is Your Pie” contest.  I thought this would be good practice for me, the plain cook who never thinks of presentation.  First prize was entry to the Crisco National Pie contest in Florida.  How I would love to attend that contest, but I wouldn’t pay the price of transportation, hotel, meals and entry.  I planned on entering four or five pie recipes, but the contest required a photo, naturally in an Emile Henry pie dish.  Alas, time ran short and I never did get my entries in.  I had one pie that was a killer, but the photo came out terrible and there was no time to do a repeat.  So only two entries made it in time.  How surprised was I when I received an email that this pie was a runner-up!  I didn’t think it looked good enough, so I’ll just assume the other entries were pretty bad.

Looks aside, this pie was delicious!  A rich, smooth, chocolatey  filling is topped with mascarpone and heavy cream sweetened and flavored with Triple Sec and orange zest.  The pie sits in a flaky Crisco crust and is topped with a special chocolate-orange bar that is grated over the top.

Eat this sinfully-rich dessert in small slices.  Though the chocolate amount is moderate by today’s standards, and the filling uses  regular milk instead of half and half or cream, it’s still loaded with calories, and no real nutrition, but, boy, does it taste good.  Go ahead and indulge, just so long as it’s a rare treat and you don’t get carried away.

The Chocolove chocolate-orange bar grated over the top is perfect for this pie. 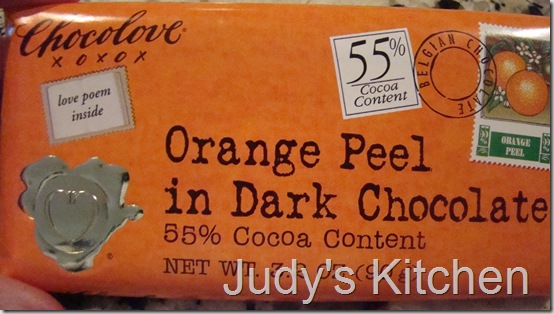 I’ve been making butter crusts lately, and have gotten away from Crisco crusts.  For this contest, I thought I would honor Crisco, the sponsor of the national pie contest.  I was very surprised to find that this pie crust was delicious!  Several people commented on how good it was, and I liked the fact that it didn’t shrink much at all when it was blind-baked.  The flaky and tender Crisco crust also complements the pie and tones down the chocolate.

Side note:  My prize hasn’t arrived yet.  It’s a $50 baking set consisting of bowls and, guess what else:  another Emile Henry pie dish!  If you’re interested, you can see my recipe on the Emile Henry website, along with the other pie entries. 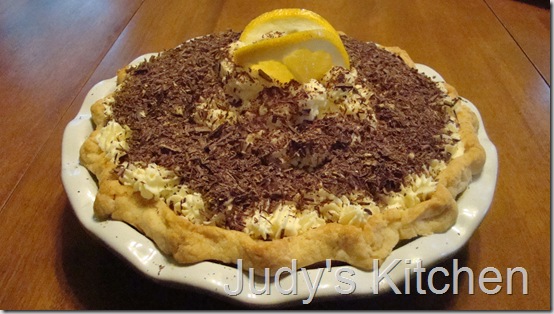 SWEET MEMORIES OF OUR FRIEND THERESE 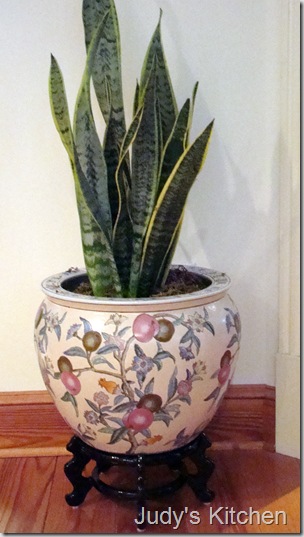 Our good friend, Therese, passed away in 2008.  We miss her a lot.  Recently, her home sold and her elder daughter traveled to New Bern to dispose of Therese’s furnishings.

Kathryn graciously offered us her mom's iron frying pans and a Dutch oven.  We were thrilled to take them.  They’re totally nonstick from many years of seasoning.    I plan on making bread in the Dutch oven.  The small frying pan (originally Therese’s mother’s) is being used a lot these days. 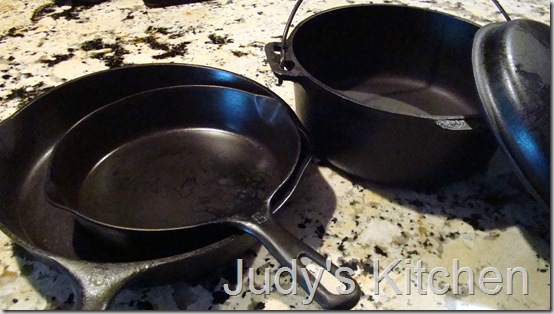 At Kathryn’s invitation, I went through Therese’s cookbooks and took the ones I thought either I or my cooking son and DIL would want.  They’ll be put to good use. 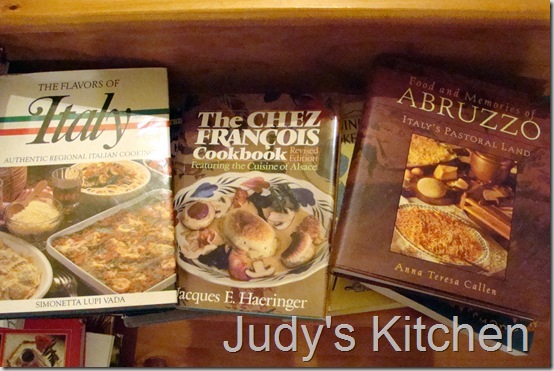 My hubby spotted an Oriental fish bowl in the pile for Habitat and asked if we could have it.  Kathryn was happy to give it to us.  The colors are perfect for our home, and we already have Oriental accents throughout.  We bought a stand for the fishbowl and found the perfect spot for it.  Though the area is somewhat dark, away from windows, we wanted a live plant.  Sansevieria (snake plant) was the perfect choice, and Guy has already dubbed it, “Sister Therese.”  Easy to grow and thriving in low-light conditions, this plant will be part of our living memorial to a dearly loved friend. 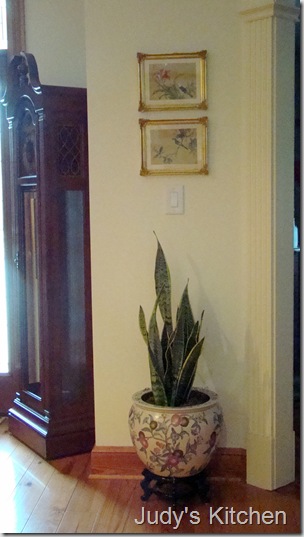