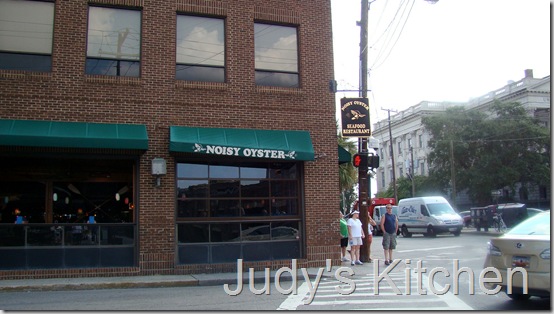 Though we live in New Bern, NC, one of my doctors is in North Charleston, and another is in Orangeburg, SC, making for an almost-1,000-mile round trip.  We always stop to visit our old-time friends, Poppy & Don, who were previous neighbors when we all lived in Long Valley, New Jersey.  When time permits, we also have lunch in Charleston.  Charleston is known for its good restaurants, but once we found the Noisy Oyster, we stopped looking.  The Noisy Oyster gets its local seafood brought in daily.  It's cooked properly and the prices are reasonable for the quality of the ingredients.  The restaurant is charmingly funky, with it’s warehouse-type windows that open (no screens) to the street. 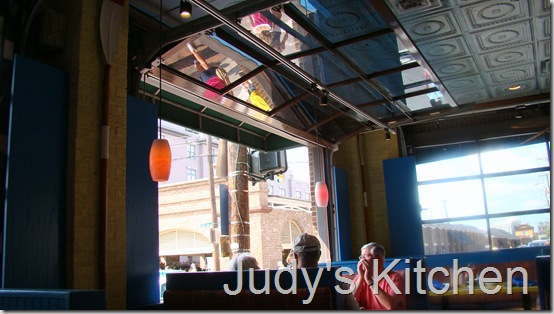 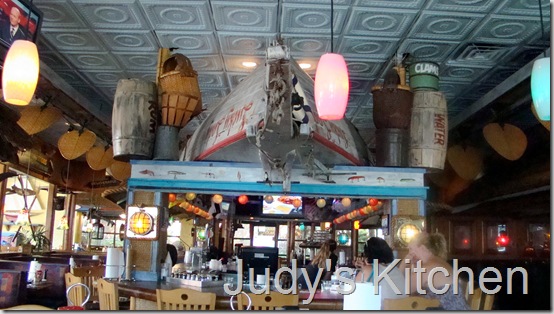 The menus are just as interesting as the ambiance, with a decidely Southern/island slant.  Where else have you seen fried gator tails listed as an appetizer?  Or maybe you’ll want a shrimp corn dog, or a low-country shrimp and grits spring roll.  You’ll have a hard time deciding, because everything sounds delicious – and a little different.   I usually agonize over my menu choice, but this time it was an instantaneous decision.  As soon as I saw grilled Mahi Mahi tacos, my mind was made up.  My obsession with grilled fish tacos started with our last trip to San Diego, and hasn’t let up.  Guy ordered the flounder sandwich. 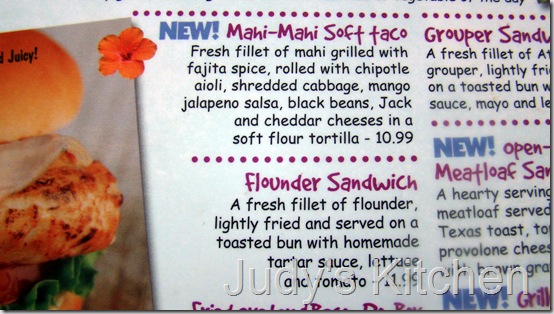 With each sandwich, you have a choice of sides.  I ordered the day’s veggie, green beans, and Guy ordered a baked potato. 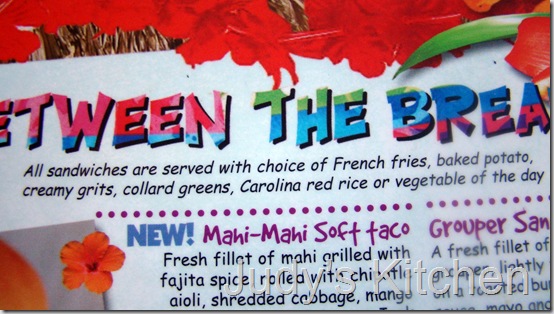 My mouth was watering for the fish taco.  Although I make them at home, I never seem to get enough.  The Noisy Oyster makes their own version, different from San Diego’s.  The ingredients are rolled up in a large tortilla, then sliced on a diagonal, resembling a burrito more than a taco.  Black beans and mango salsa are incorporated in the wrap instead of being served separately with rice.  If I had to vote on which fish taco was the best, it would be a draw.  This was different, but equally as good as the fish tacos I had in Ocean Beach.  I could only eat half – it was just too big.  We wrapped the remainder in tinfoil and put it in the cooler.  When I had it about 3 hours later, it tasted just as delicious as when it was warm.  The green beans, however, are typical low-country beans, cooked to death with a ham hock.  Not so good to a Northerner who likes crisp-tender green beans. 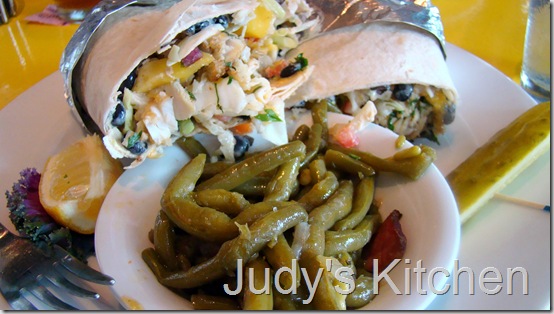 Guy said his flounder sandwich was the best he had ever eaten.  The flounder was juicy and meaty, and the breading was not overpowering.  We both feel flounder should be treated with respect when it’s cooked, so as to preserve the delicate flavor and texture.  The Noisy Oyster must agree. 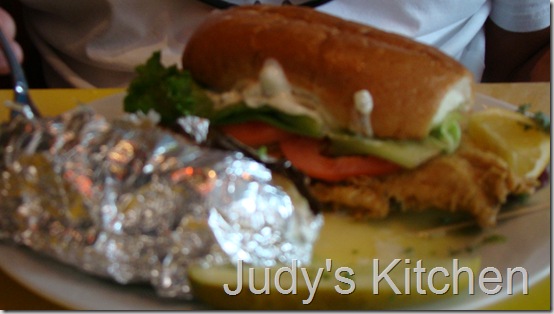 We’ll be going back in 6 months and will be doing our best to work in another lunch at  the Noisy Oyster.  If you get to Charleston, plan on visiting the open market across the street and having lunch or dinner at one of the best restaurants for seafood in the country.
(Please note:  I have not been compensated in any way for this endorsement.)
Posted by Judy at 11:08 AM 3 comments:

Guy and I have been successfully dry aging whole ribeyes at home for more than a year.  When whole Black Angus filet mignons went on sale recently at Harris Teeter, I questioned Guy about dry aging on this cut of meat.  He decided to give it a try.  We bought a whole filet mignon in the cryovac package and kept it in the original package until the expiration date.  We thought that would give the beef the most wet aging to develop some flavor. 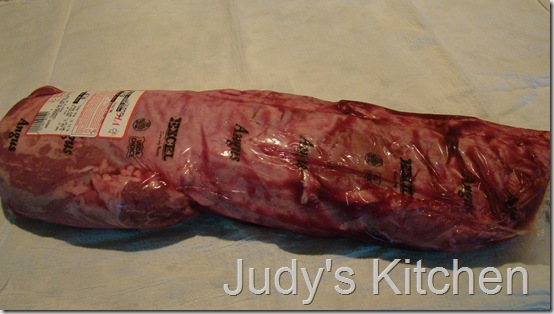 On the day of expiration, we cut the beef out of the package and rinsed it under cool water. 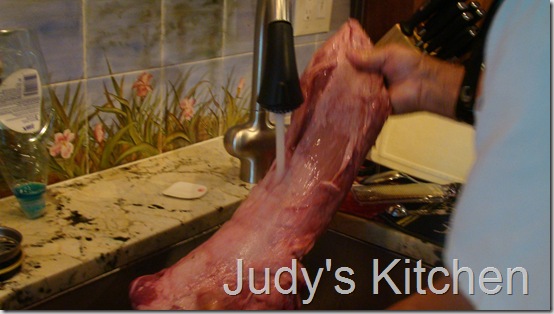 The beef was patted dry with clean paper towels. 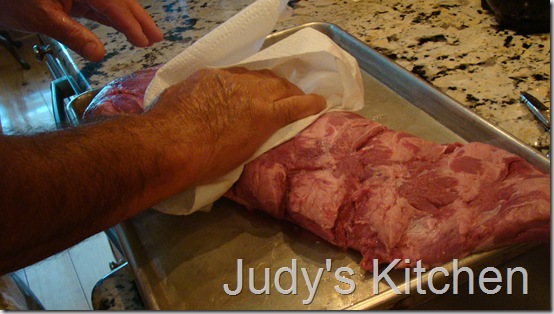 Then it got wrapped in clean 100% cotton cloth.  (The cloth is never washed with soap.  It gets rinsed in cool water, then “washed” in the sanitary cycle of the washing machine with no detergent.  After they are dry, we fold them and pack them in clean resealable plastic bags.) 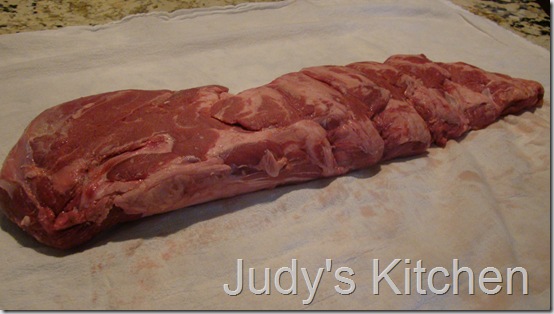 Blood will get on the cloth.  The dry aging dries up some of the blood, so there will be less and less blood on the cloth each day.  Once a day, the old cloth is removed and a new clean cloth is wrapped around the beef. 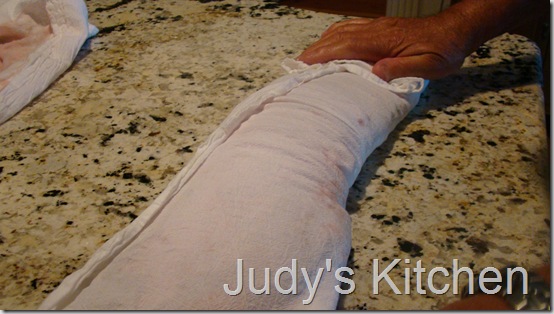 The wrapped meat is placed in a dedicated refrigerator, where the humidity and temperature must be within specific ranges. 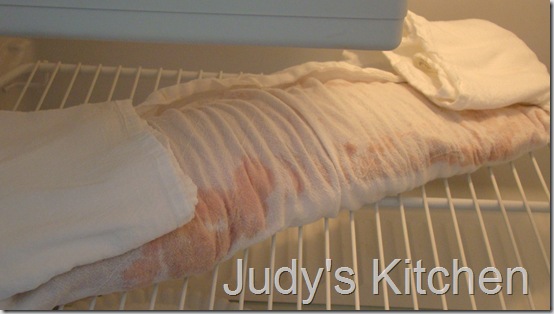 Filet mignon cannot be dry aged for 2-3 weeks like a ribeye.  We only dry aged this piece 4 days before we trimmed it and cut it into steaks. 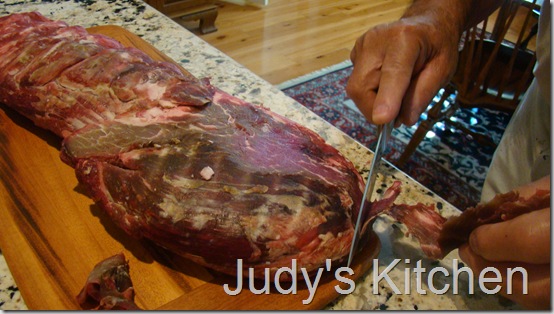 The steaks are incredibly tender and flavorful because of the extra aging.  Salt and pepper are the only seasonings needed to enjoy the filets. 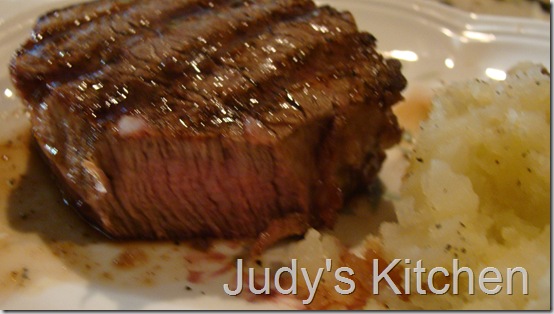 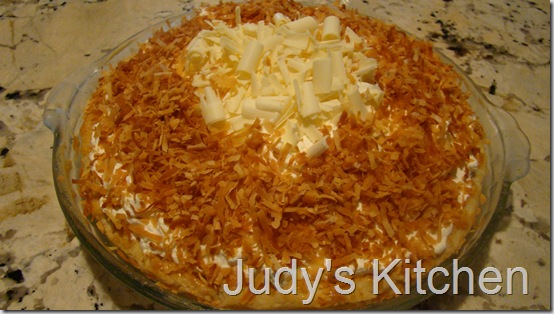 It’s been years since I’ve made a coconut cream pie, one of my family’s favorite desserts back in the day.   When I saw Birdseye  unsweetened coconut  in the freezer case of my grocery store recently, I thought I’d try my hand at a new creation.  Canned coconut milk, white chocolate and unsweetened coconut create a rich, yet light, delicious filling that’s made almost smooth after a whirl in the food processor.  Sweetened whip cream, toasted sweetened coconut and white chocolate curls top off this pie and really make it special.   I’ve revisited one of our old favorite desserts and brought it to new heights.  You can bet I’ll be making this again. 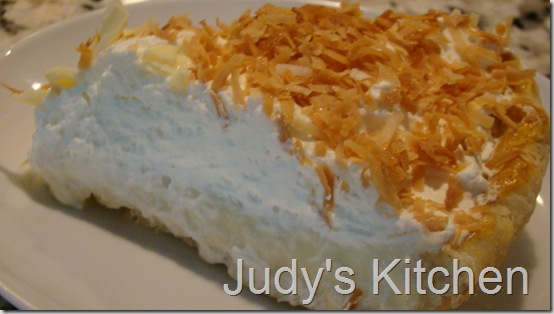 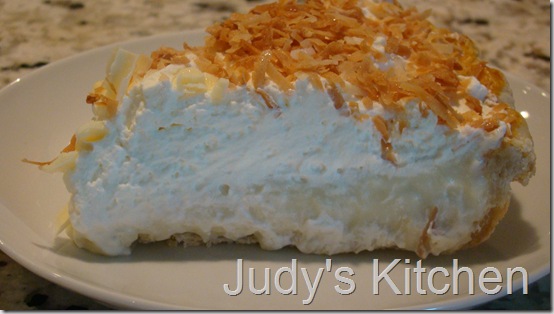 This recipe, from Aida Mollenkamp at Food Network, has been tweaked by me and it’s pretty good.  Instead of using all-purpose flour, I used part White Lily flour to make the crust more tender.   I added some liquor to the dough to create more tenderness also.  For my coconut cream pie (pictured), I used 1 Tbsp. coconut-flavored rum, but you can use whatever alcohol will complement the dish you are making. 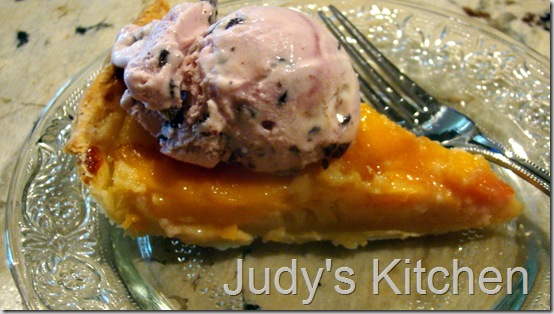 In September, 2008, I made the most delicious peach frangipane tart.  The tart has three components:  pastry dough, frangipane and fruit filling.  I used a standard gallette dough and my own peach filling.  The frangipane was made using a recipe on the back of Bob’s Red Mill almond flour.  There was no reason to try any other frangipane recipe, because Bob’s was superb.  But, thinking that Epicurious might have a better one, I ventured out.  The Epicurious recipe uses double the amount of almond flour and egg, and I thought it might possibly be a new favorite.  I was wrong.  Bob’s Red Mill has the best recipe for frangipane, IMHO.  The flavors are spot on and there’s just the right amount of almond flour.  I’m not saying the Epicurious recipe is bad.  It’s just richer, but still very good.  Topped with Dove raspberry sorbet-vanilla ice cream, it’s a little bit of heaven.  When I make another frangipane tart, though, you can bet I’ll use Bob’s recipe. 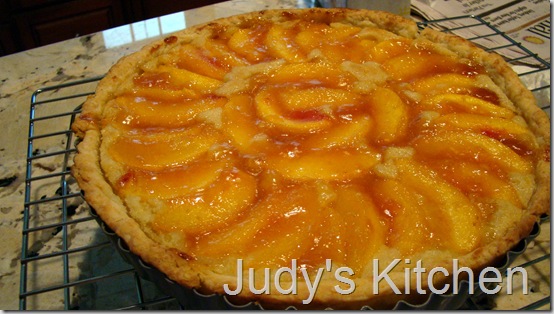 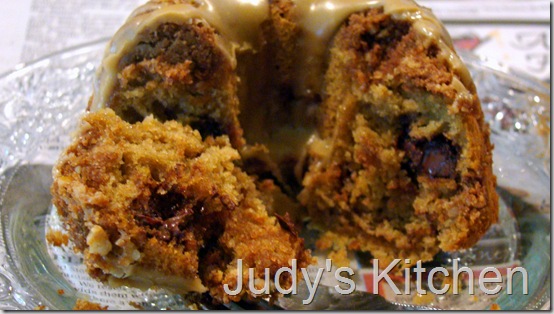 Looking for a moist, tender, delicious-tasting coffee cake with a good coffee flavor?  This is it.  And it’s the perfect size for two people (or one very hungry piggy).  The wonderfully aromatic coffee-flavored cake is accented by an equally aromatic coffee-flavored glaze.  Cocoa and chocolate chips added to the batter make this irresistable.  If you have a Wilton Excelle Elite 6-Cup Mini Bundt Pan (available thru Amazon.com for $21.49), you can make six of these little devils and freeze the ones you don’t eat immediately.  And they are devils, because they will tempt and entice you from the freezer.  If you don’t have the mini bundt pan and don’t want to buy one, just make 12 cupcakes.  Either way, this is one memorable dessert. 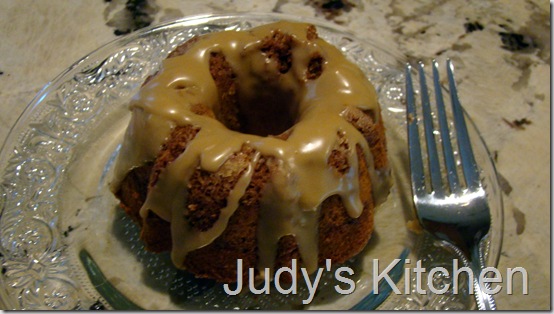