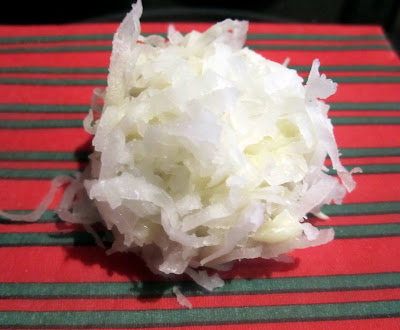 For the Nestle holiday cookie contest, I entered Chocolate-Almond Snowballs.  These are fudgy treats covered in white chocolate ganache and coconut.  Two bites of deliciousness.  The dough is made in a food processor, so easy.  The recipe is now on the Nestle Facebook Ap.  You can get it by clicking here.  Once you are at the site, click on "view entries."  Scroll down till you see the above photo.  Unless, of course, you get sidetracked by some of the other great recipes.  This contest has judges, but if you have a spare minute, would love you to leave a comment.  I don't expect to win, but it was fun coming up with an original, easy recipe.  The extra bonus here is that I have a new Christmas cookie and it's one of my top faves.
Posted by Judy at 2:03 PM 4 comments: 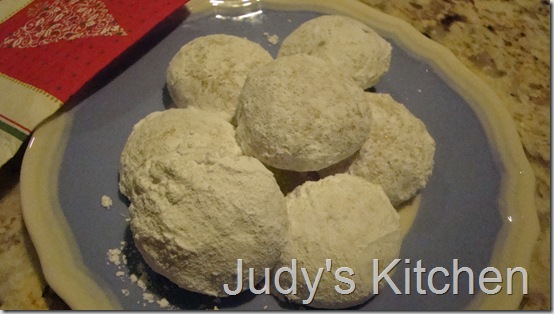 If you’re looking for the best recipe for these delicate cookies (aka butter balls, Mexican wedding cakes and Russian tea cakes), look no further.   I always thought the best version would have a higher ratio of nuts, but Pillsbury uses fewer nuts in their recipe, producing a more tender cookie.  They also use a higher ratio of vanilla.

I made 3/4 of the full recipe, but used the full amount of flavoring, subbing vanilla  powder for the vanilla extract.  Then I added 1 tsp. of rum (not extract).  Instead of mixing the dough with an electric mixer, I just threw everything into the work bowl of my Cuisinart – so simple and quick.  The flavor and texture of this cookie is outstanding.

SPRUCE UP YOUR ARTIFICIAL CHRISTMAS WREATH 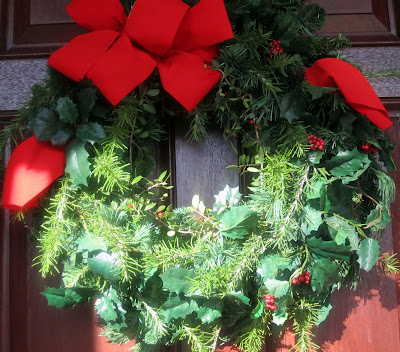 Want a free and easy way to spruce up your artificial Christmas wreath?  Try this idea.
Posted by Judy at 9:02 PM 2 comments: 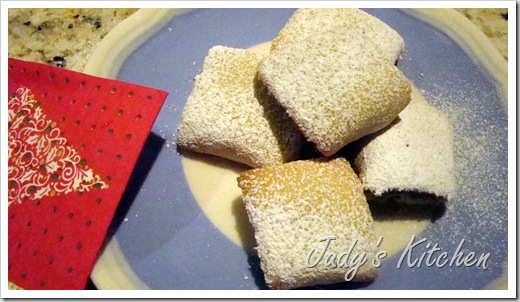 My Sicilian mother-in-law used to make the most wonderful fig bars.  Unfortunately, I never got her recipe, but this one from a 1960's Pillsbury recipe is not bad.  Of course, you have to love figs, because that’s the main ingredient.  The recipe makes 4 dozen, a nice batch of cookies for Christmas, or any time of the year. 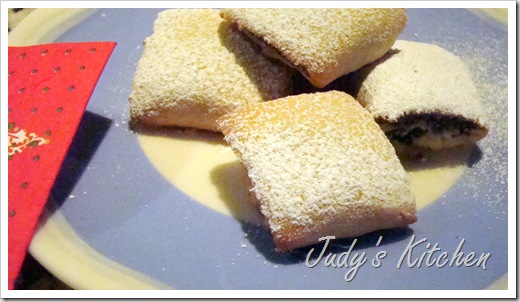 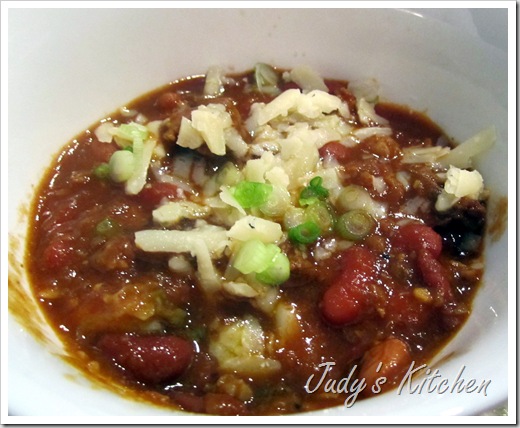 When I was a finalist at the Branson Taste of Home Great American Pie Bake-off, Al Roker, one of the judges, gave all of us a signed copy of his barbecue cookbook.  In it were several chili recipes, one of which was his.  I doctored it up quite a bit because I like a chili with complex flavors, and his recipe  seemed very one dimensional.  I doctored it so much that I can no longer call it by his name.

The flavor of this chili is great – it’s everything I would ever want in a chili.  But, after eating it, Guy and I both agreed that we prefer ground meats in our chili, rather than cubes of chuck steak.  Our senior jaws and teeth prefer as little chewing as possible.  It didn’t stop us from eating it though, because this is some good chili.  There’s just enough heat, and it comes in waves so that you don’t get it all at once.  The hot Italian sausage and Hatch chili peppers seem to take turns delighting your tongue with their presence.  Next time I make this, however, it will be with ground beef. 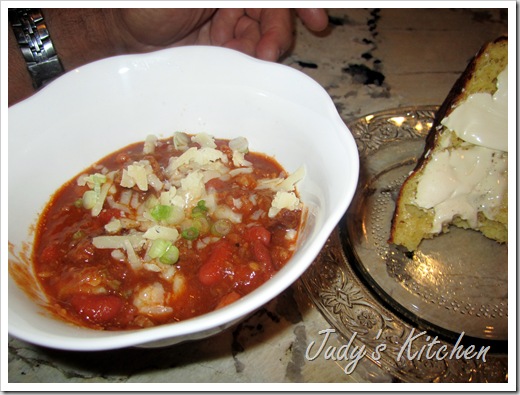 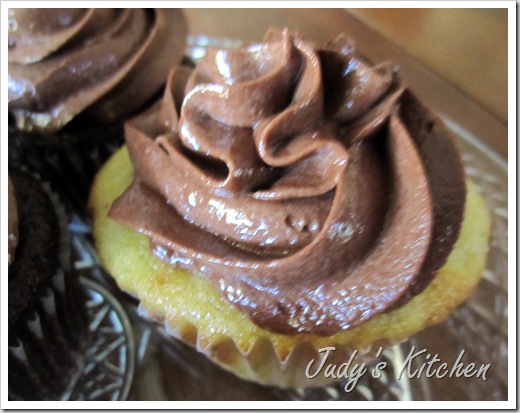 This is a great recipe from the April 2010 issue of Ladies Home Journal.  The recipe is actually for a cake baked in a 9-by-13-by-2-inch pan, but I wanted cupcakes.  The cupcakes don’t crown, which could be a good thing or a bad thing, depending on how you view it.  I viewed it as a good thing, because it’s easier to swirl frosting on a flat cupcake. 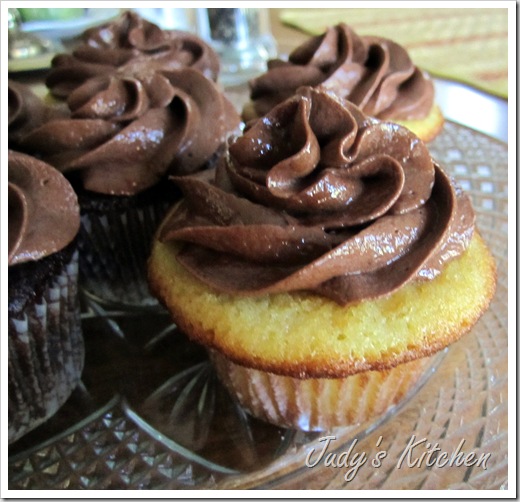 The only other problem is that there’s too much batter for 12 cupcakes.  I put the extra batter into a 6” ramekin, so someone got a double cupcake.  I don’t know of anyone that has a 14-cupcake tin, so this was my best solution.  The cupcakes are fluffy, light and moist with a rich buttery flavor.  They really are perfect. 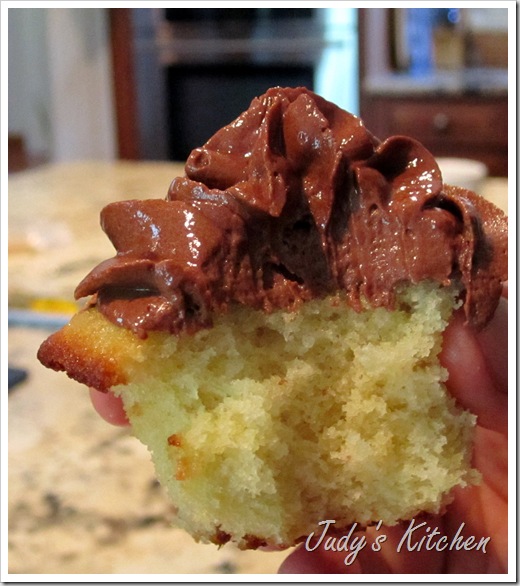 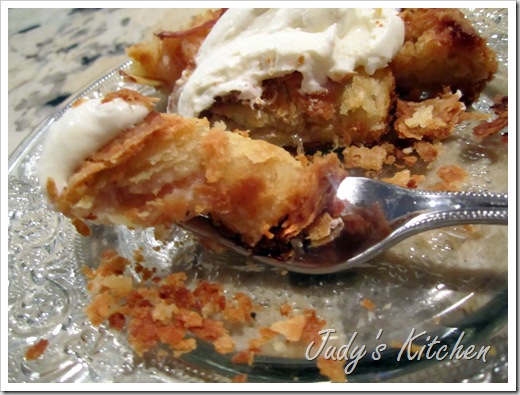 Not quite up for a fussy apple pie?  Make this easier galette with only 1-1/4 lbs. of apples on top of a luscious almond cream filling.  The sophisticated flavors and rustic presentation are perfect for company, or just make the galette for yourself and your family.  You’ll get 6 - 8 servings of a rich, flavorful dessert.  And if you use my new favorite pie dough recipe, you’ll all be raving as much about the uber-flaky pastry as the apple-almond filling. 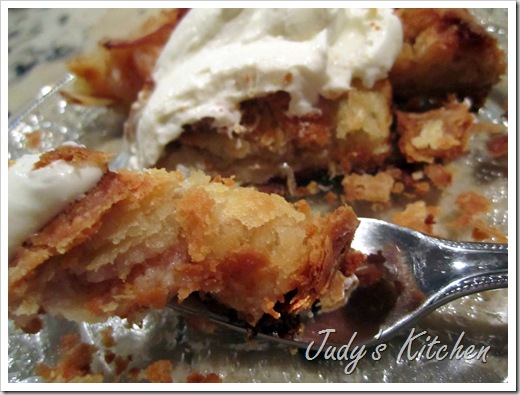 Pie crust made with nonfat Greek yogurt?  Weird, yes, but amazingly tender and uber-flaky, too.  It’s a cinch to mix – right in your stand mixer!  The crust has a wonderful flavor and texture that belie the simplicity of this recipe.   No doubt about it, this has become my new favorite pie crust, thanks to salad-in-a-jar.com. 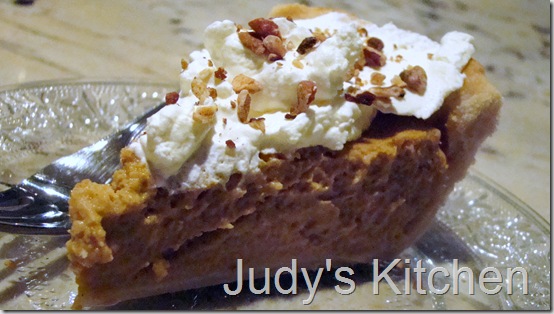 I never tire of trying new pumpkin pie recipes.  This one is from Better Homes and Gardens November 2010 issue.  BHG included a recipe for Hazelnut Mousse to be used as the pie topping, which I didn’t make this time.  The pie, itself, is spiced and sweetened nicely.  The recipe recommends prebaking the crust, but I opted not to do that, since  I’ve had good luck in the past without prebaking.  But I was using my new Emile Henry pie dish for this pie.    The bottom crust was a little underbaked, so I think I’ll stick to Pyrex for pumpkin pies.  I’m going to include recipe instructions for prebaking the crust and you can decide if you want to skip that step.

I subbed 1/2 cup baked sweet potato for some of the pumpkin to give the pie more flavor, reduced the brown sugar by about 2 Tbsp. and subbed half and half for the milk.  The recipe didn’t specify what kind of brown sugar, so I used dark brown.  I tasted the molasses overtones in the finished pie and wished I had used light brown sugar, so I’m specifying that in the recipe below.  The pie’s texture and flavor were really good, but my #1 pumpkin pie recipe is still the Traditional Pumpkin Pie I made for Thanksgiving 2009.
My rating for the pie is based on the assumption that the pie crust is cooked all the way through and is not underdone on the bottom, something that I think detracts from a pumpkin pie.  If I had followed the directions (or used my Pyrex pie plate), it would have been cooked properly. 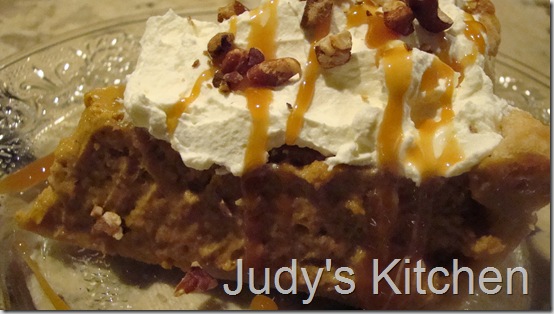 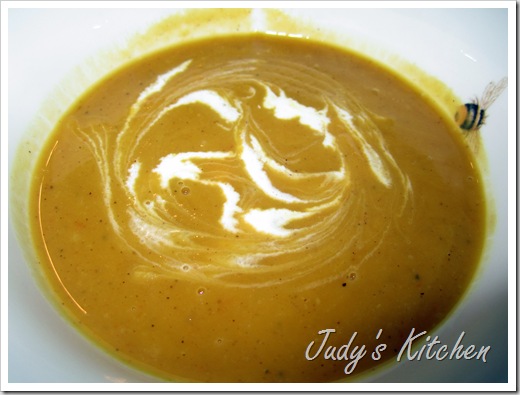 The February 2009 issue of Better Homes and Gardens profiled Juliana Hale of the BHG Test Kitchen and her soups, of which this was one.  Juliana grew up in a family of 12 and is a real soup advocate.  Her recipe for pumpkin soup is fairly direct and not overly complicated, but she also included instructions for making spiced croutons for a garnish.  I opted out of the croutons, but if the idea turns you on, just toss some bread cubes with pumpkin pie spice and saute them in hot butter till they’re toasted.

I liked this soup a lot and will be making it again.  It’s easy, satisfying, just sweet enough and has excellent complex flavors.  Though I like some pumpkin soups that have a spicy hot edge, I also like this one that’s just a simple pumpkin soup.  And I’m happy to eat it sans garnishes.  The original recipe yields 8 side-dish servings – too much for me as the only fan of pumpkin soup in my home.  I cut the recipe to 1/4 to yield two servings.  One for now, one for tomorrow.