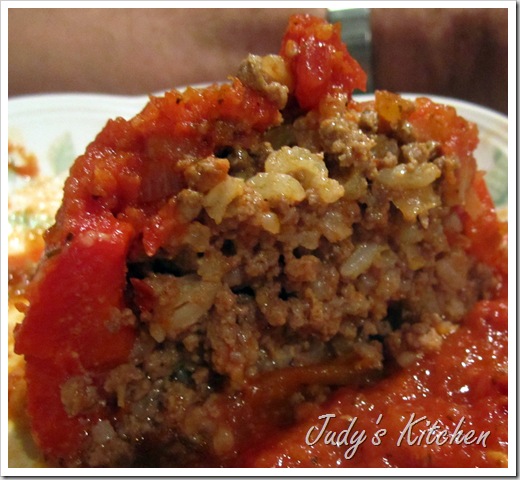 So hubby’s been complaining that I don’t make enough comfort food for him.  Our friend, Mary, sends him over stuffed peppers now and then, and he was wondering why I can’t make them, like I used to back in the day.  And to drive the point home,  he grew a batch of bell peppers this year that were stellar specimens.  As they turned red, I started roasting them.  But the peppers were growing faster than we could eat them.  So I decided to make him happy.

Instead of using my old family favorite recipe, I searched the internet for a new idea.  A half batch (3 peppers) would be enough to try it out.  Look at these gorgeous peppers from our garden: 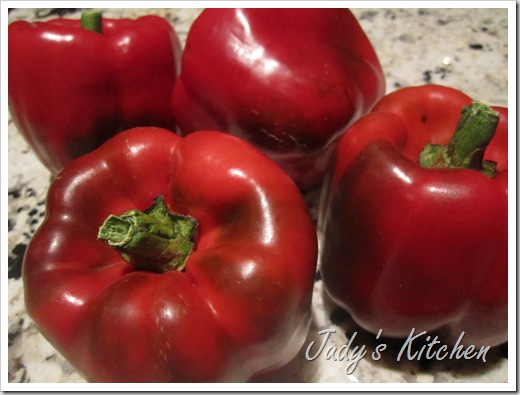 Green peppers will make a firmer shell for the stuffing, but red peppers are sweeter.  Just be sure not to overcook the peppers, whether they’re green or red.

Now for Guy’s critique – he loved the flavor but prefers green peppers for their firmness.  He also doesn’t appreciate thick sauces, like this one, even though the taste was amazing.  I loved these and would have stopped searching, but he wanted stuffed green peppers, thin sauce, less rice.  Well we had plenty of peppers, so why not?  More posting to come.

In the meantime, if you like thick sauces, this is a great recipe, full of flavor.  I’m printing the full batch because you will want all six peppers.  And, P.S., they taste even better when reheated later in the week. 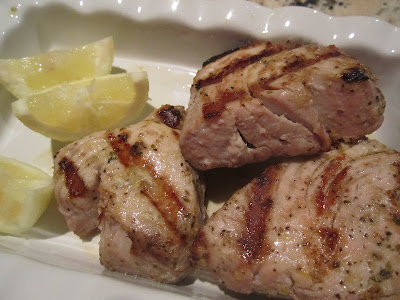 It's been a little over two months since my hubby returned from his "fishing trip of a lifetime" in Grand Isle, LA, with a stellar catch of fresh tuna and red snapper.  Most of the fish went right into the freezer, in small packets convenient for a family of two.  Whoo Dat Tuna Salad continues to be a favorite way to use up the tuna, but today's very easy recipe is also absolutely delicious, especially when you don't have the time or motivation to fuss.  Leftovers are terrific cut up on a green salad, or made into -- you guessed it -- tuna salad.  Get the recipe... 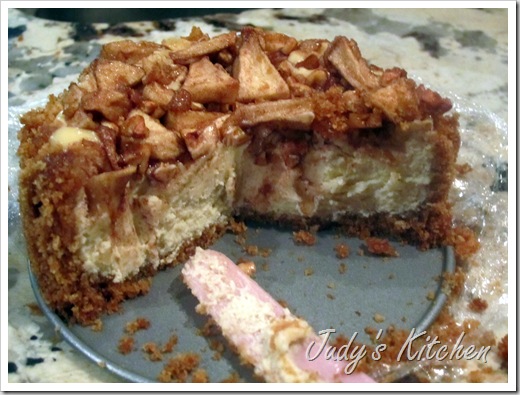 These little cheesecakes are perfect for up to four people (two servings per cheesecake).  If you’re a big dessert eater, you may want one all to yourself.  I cut the original Kraft recipe in half and adapted it slightly, using Neufchatel cheese instead of full-fat cream cheese, nonfat Greek yogurt in place of sour cream and my own graham cracker crust on the sides as well as the bottom (hubby loves a thick crust).  We gobbled these up, eating cheesecake after dinner for several nights. 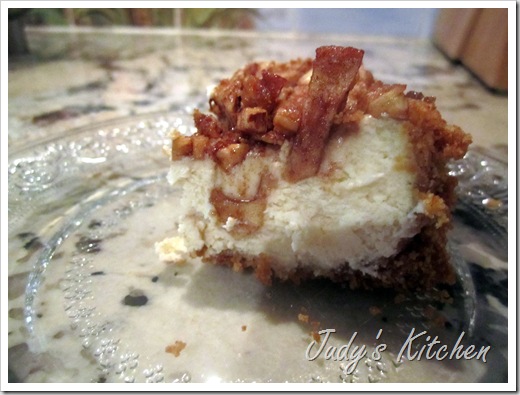 The brown sugar used in the crust, cheesecake filling and the apple-pecan topping imparts a caramel flavor to this dessert which complements both the apples and the pecans.  If you’ve made apple cheesecakes before, but not with brown sugar, please give this a try.
If you don’t have 4-1/2” springform pans, think about buying them.  They’re not expensive at all, about $5 each, and so worth the investment.  You can also bake cake batter in them to make those cute little Bistro cakes. 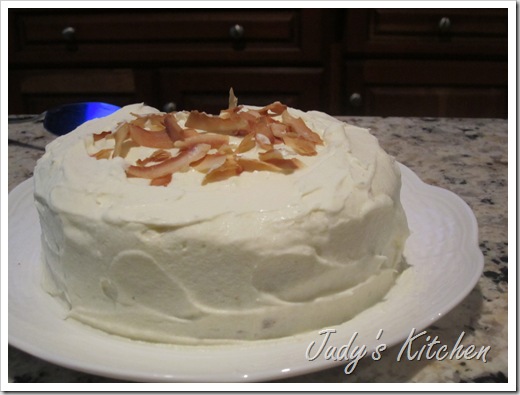 It’s carrot cake time again.  I love trying out different recipes.  Alton makes his carrot cake in a 9” x 3” round cake pan.  I cut the recipe in half and baked it in a 6” x 2” round cake pan.  The remaining batter went into two (3-1/2”) ramekins.  His flavorings are different, and not everyone liked them.  I think the allspice was the fly in the ointment.  Still, the cake was good, and we enjoyed it.  I mean, is there such a thing as a bad carrot cake? 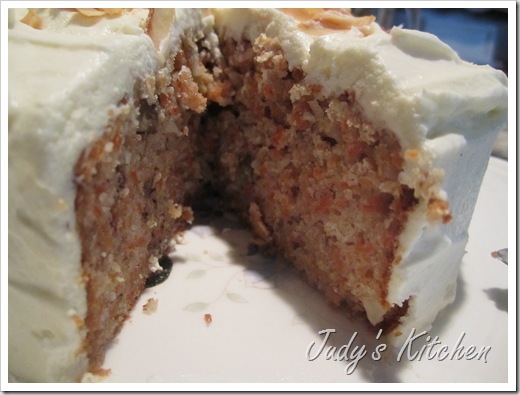 Alton’s recipe, compared to Cook’s Illustrated’s, has less spice, though his spice has a sharper flavor that doesn’t go well with the carrots.  He also uses less carrots, slightly less sugar, less salt, one less egg and no pineapple.  I doubled the salt and added coconut and pecans because Food Network reviewers complained about lack of flavor.

Maybe we’re all too used to carrot cake that has something besides carrots and spices to develop flavor.  Interestingly,  Cook’s Illustrated’s recipe relies on cinnamon, nutmeg and cloves; Pillsbury’s recipe uses only vanilla, no spices; yet both are perfectly balanced and have other ingredients (coconut, nuts, pineapple) that help to develop flavor. 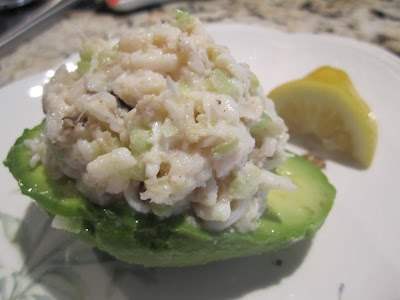 This crab salad is perfect for anyone who appreciates the delicate flavor of crab meat and doesn't like to cover it up with tons of spices and ingredients that mask it.  Four ingredients, not counting the crab meat and salt and pepper, and you're on your way to crab heaven.  Serve it as is, on lettuce or spinach, in a sandwich, or in a tomato or avocado.  It doesn't get much better than this.

HOW TO DRY BASIL 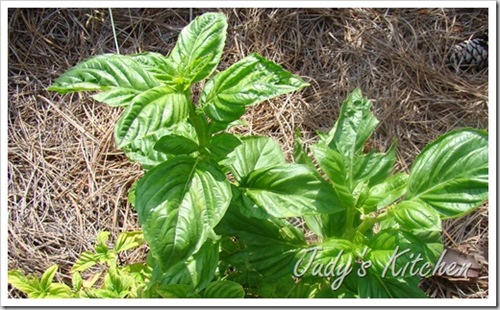 We planted too much basil this year.  I’ve given tons away, used it in cooking and salads and made basil pesto, and I still have basil coming out my ears.  We decided to do something.  We cut off a bunch of stems, pulled off the leaves, then rinsed and dried them. 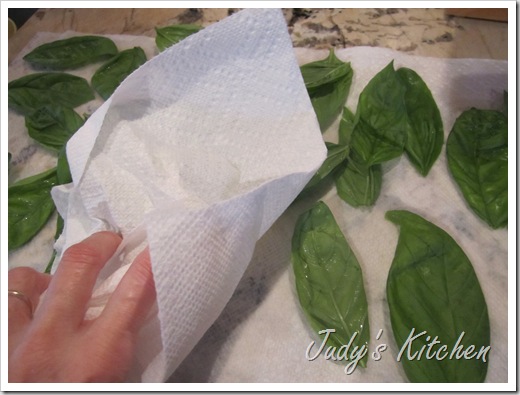 Hubby cut the basil in smaller pieces with kitchen shears. 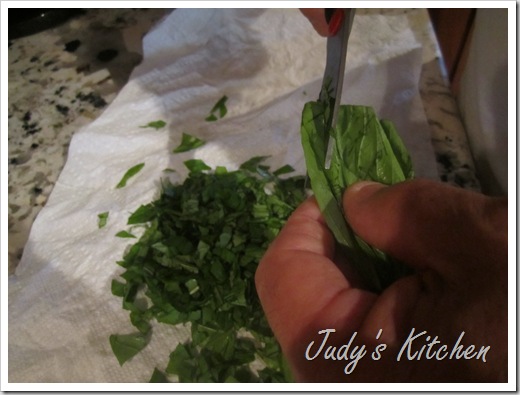 Then he laid them on a window screen that he first washed. 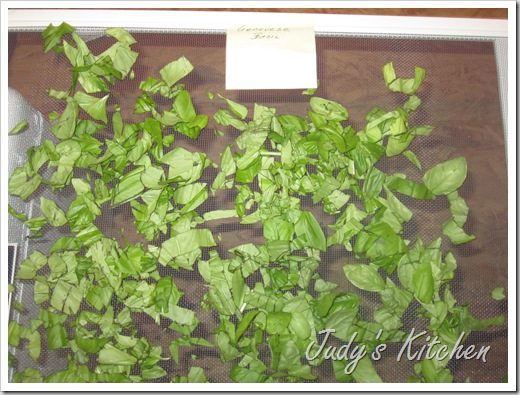 Up to the attic they went for about 2 weeks.  The result?  Dried basil that looks, smells and tastes just like the dried basil you find in a store.  Except for one thing:  this basil has not been irradiated like McCormick’s.  Now he’s drying more to give away. 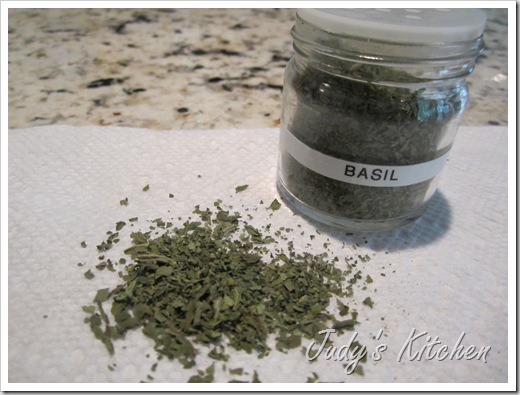