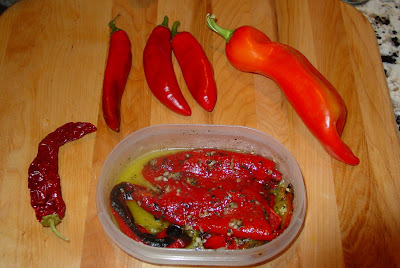 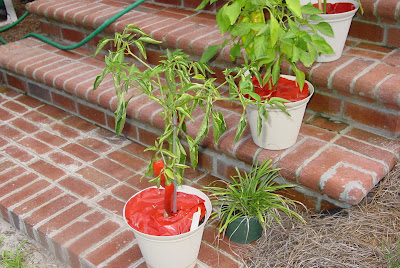 Peppers are a part of Guy's Italian heritage, and I have learned to love them, especially when they're roasted. This year, we decided to grow container peppers. In various garden pots, we tried paprika, Cubanelle peppers, green and red bell peppers and an Italian variety for which Guy paid $10.00 for a packet of seeds.

My heritage is Hungarian, and about 20 years ago, my mother brought her last remaining relative to the US to visit. Rosjie (my Hungarian relative), my mother and younger sister all stayed with us for 2 weeks. Rosjie cooked us real Hungarian Paprikash. She brought the paprika from Hungary -- it was almost black -- and told us that the reddish-brown paprika we get here is what they reject. They keep the good stuff for themselves. She used 1 lb. of lard and 2 lbs. of sour cream to make the paprikash and the spaetzles. Talk about a heart attack on a plate, but was it good! I always thought that Hungarians had the corner on paprika, but now it is emerging from other parts of the world.

Recently, I purchased a paprika plant at one of our local nurseries.  It has been amazingly prolific. You can see it above -- the plant on the bottom step with the two red peppers. We put the red plastic over the soil of each pot because it is supposed to increase the yield, according to scientific studies. It must have done something for the paprika because it just wouldn't quit. We have taken at least 25 peppers off that little plant so far. The leaves of the plant curled up a few weeks ago, and we thought the plant was dying. Next time we looked, there were new leaves sprouting and there are more paprikas coming! When the paprikas are nice and ripe, we take them off and then string them in our hot attic to dry them out. Then we crush them in the food processor. (BTW, paprikas come in two varieties: sweet and hot. Our plant is hot.)

We love to roast the sweet peppers. If you've never had fresh roasted sweet peppers, you are in for a treat. They are so darned easy to make, you shouldn't deprive yourself of this treat. They're wonderful on sandwiches, as an accompaniment to meat or chicken or as a salad with asparagus or other roasted veggies. Here is an easy recipe for roasted red peppers:

Wash pepper, dry. Place under broiler or on a hot grill. When you see the pepper charring, turn it to char the other sides. After the entire pepper is charred all around, remove it and place it in a paper bag that you close or in a bowl with plastic wrap over it. Let it sit for about 10-15 minutes. Take pepper out and peel the skin with a knife. It should peel easily. Cut the pepper top off and pour out juice. Cut the pepper in half and remove seeds and membrane. Cut into several pieces or strips, as you prefer, and place in small container.
Leave it plain or add the following optional ingredients:

Mix together. Chill or serve immediately.
Posted by Judy at 8:07 PM