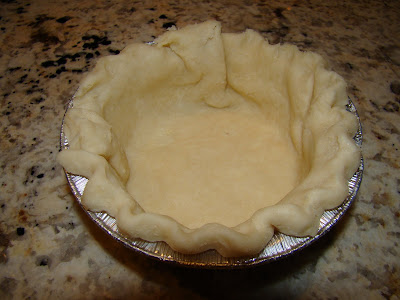 Leave it to Cook's Illustrated to come up with a pie crust recipe that uses vodka to get a flaky, tender crust. Naturally, there's a scientific reason for it: 80 Proof vodka is 60% water, 40% alcohol. The alcohol burns off, leaving a tender, flaky crust. The alcohol also does not add to gluten formation, another factor in the incredible flakiness of this crust. So I tried it for my pumpkin pie this year. But we didn't have an 80 Proof vodka -- we had Smirnoff 70 Proof; and it worked just fine, even though it was citrus flavored. You cannot taste the vodka, nor the citrus. Since part of the secret of this recipe is chilling the crust, even after rolling, I decided to use an aluminum pie pan, instead of the usual glass one. CI recommends placing the pie on a cookie sheet and baking it on the bottom oven grate , so I did away with my pizza stone and followed their instructions.
What can I say? CI came through again. This pie crust ranks right up there with my fave, and I thought I had the best recipe for pie crust. I've rated both recipes 10 out of 10; both pie doughs are tender and flaky and flavorful, though I think my old fave has slightly more flavor, given it contains an egg and vinegar; but the CI vodka crust is definitely flakier. With my first attempt at making CI's pie crust, I was amazed at how easy it was to roll out. But if I follow the CI instructions on chilling to make my fave, maybe it will also be easy to roll out. I will have to work with both doughs a number of times before I can truly make a comparison. For now, I have two favorite pie crust recipes; and either one will be okay by me.
Here's the rub. As I read a lot of the comments from people who have made this crust, I found that the dough is supposed to be very moist, more moist than usual. So It requires as much as a 1/4 cup of flour to roll it out. Well, my crust didn't need much flour at all to roll it out. What did I do wrong? I followed their recipe, that's what. They said 2-1/2 cups of flour, or 12-1/2 oz. I guess 2-1/2 cups is supposed to equal 12-1/2 oz., but my 2-1/2 cups came up short, so I had to add more flour to get the weight. The dough was not exceptionally moist. It went together, but it was tight, not exactly dry, but actually perfect for rolling, not requiring much flour at all. (In hindsight, I think what happened is that the relative humidity in my home is very low right now [about 34%]; and the flour weighed less. I did some quick research online and found that humidity levels can and do affect flour. I also had trouble with a cookie recipe same day for the same reason.) So whether you measure by weight or volume, remember to check the humidity levels in your home -- but the real key is to assess what kind of a dough you have and make an educated guess on the amount of flour you need to roll it out. (I've got another interesting story of a pie crust disaster in my early years because I used too much flour to roll out the crust -- I'll save it for another time, but please only add as much flour as you absolutely need or you may wind up with a stiff-as-a-board pie crust.) If the dough is very moist, don't be afraid to use as much as 1/4 cup flour to get it to roll out. And be sure you work with a well-chilled dough before you roll.
According to CI, this recipe yields two crusts. I used one for the pumpkin pie and froze the other for later use. Once I rolled out the dough for the pie, I still had some left over. I rerolled the dough and was able to fill a small disposable pot-pie tin (see top photo). I froze it for later use, also. Next time, I'll separate the dough into 3 crusts, instead of 2. (Note that I like a thin crust. If you roll yours thicker, you should keep to 2 crusts.)
One more note: CI recommends using pie weights when pre-baking a crust. Since I didn't have pie weights, I subbed a 1-lb. bag of dried chick peas (garbanzo beans), and they worked perfectly. They can be reused many times -- I just put mine in a plastic bag for next time.
Cook's Illustrated Vodka Pie Crust
Rating: 10 out of 10
INGREDIENTS:
12 Tbsp. (1-1/2 sticks) cold unsalted butter
1/2 cup cold vegetable shortening, cut into 4 pieces
1/4 cup vodka (I used Smirnoff Citrus, 70 Proof)
1/4 cup water
2-1/2 cups (12-1/2 oz.) unbleached all-purpose flour, divided use
1 tsp. table salt (I used sea salt)
2 Tbsp. sugar
Cut the butter into 1/4 " slices, then into quarters. Measure the shortening and cut it into small pieces. Lay it all out on a sheet of wax paper and put them in the freezer for about 15 minutes. 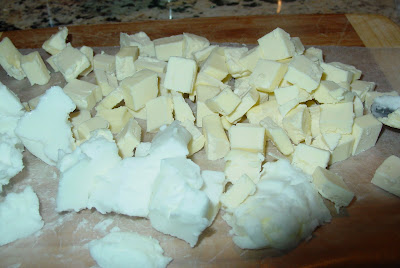 Measure the vodka and water in a measuring cup so that it equals 1/2 cup, and place it in the freezer also.

Process 1-1/2 cups flour with the salt and sugar in the work bowl of a food processor until combined, about 2 one-second pulses. Add the butter and shortening and process in short, quick pulses, until dough comes together in uneven clumps. (Don't use a continuous pulse, as this incorporates the fat too quickly.) All the flour should be coated, and the dough should kind of look like cottage cheese curds. Scrape down dough and add remaining cup of flour; pulse again, with short, quick pulses, until mixture is evenly distributed around bowl, about

4-6 quick pulses. Using feeding tube, pour vodka/water mixture into bowl and again use short, quick pulses to incorporate into dough. Pulse till dough is mixed and comes together. You should be able to see tiny pieces of butter in the dough. Remove dough from work bowl and divide into two or three equal pieces (two if you like a thicker crust; three if you like your crust thinner). Flatten each into a 4" disk and wrap each in plastic wrap. Refrigerate at least 45 minutes, or up to 2 days, or freeze for later use. 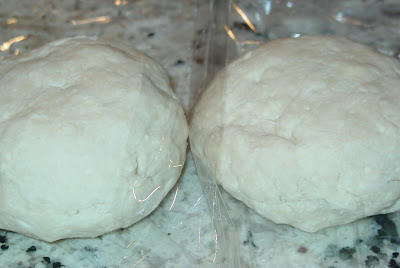 When ready to bake, preheat oven to 400F. Place oven rack in lowest position and place a rimmed baking sheet on bottom rack. Roll out chilled dough into a circle, about 13" diameter, using two sheets of wax paper. Use the amount of flour that is right for the consistency of your dough. Place the rolled-out dough on the wax paper in the fridge for 15 minutes, then transfer to a pie plate; trim and crimp edges. Line dough with tinfoil and weight with pie weights, beans, rice or coins. (Note: a 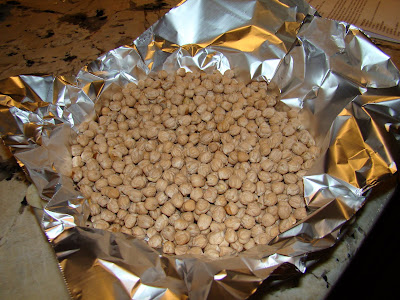 1-lb. bag of dried chick peas works great!) Bake 15 minutes; remove foil and weights (just lift all 4 corners of the tinfoil up and out of the pie crust); bake 5-10 more minutes, or till crust is golden brown and crisp. Cool slightly. If filling with pumpkin pie filling, place hot filling in warm crust.

very helpful; I used pear flavored vodka (all I had) to make a pear pie with pecans and it was amazing

I made the crust for a cherry pie, using dark rum instead of the vodka. Worked perfectly. I figured the 2.5 cups/12.5 oz of flour was an error in the recipe (2.5 c equals 312 grams, 12.5 oz equals 350 grams) so I averaged the two and used 330 grams of flour. The dough was very sticky when I first made it, but perfect for rolling after resting in the fridge.