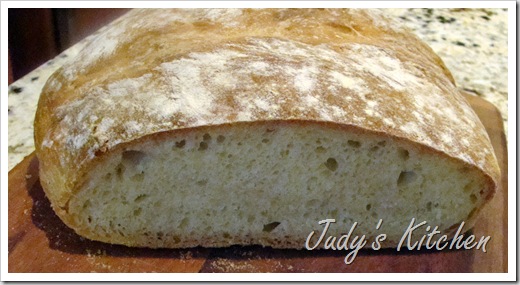 I know this is chocolate month, and I should be posting a chocolate recipe, but you can smear Nutella on this fabulous crusty bread and call it a chocolate dessert.  Besides, it’s cold outside, and warm-from-the oven bread slathered with anything sounds pretty good right now.

Jim Lahey and Rick Flaste of Sullivan Street Bakery in New York, authors of the 2009 book “My Bread,” introduced a revolutionary no-work, no-knead method of baking bread sometime in early 2000’s.  The New York Times published one of their recipes, and received more emails for it than any other recipe.  (Now that the hype is over, you can buy their $29.95 book for about $17 through Amazon.com.)

America’s Test Kitchen (ATK) got inconsistent results when they tried the Sullivan Street Bakery recipe, so they worked to improve it.  The original recipe condenses bread making from 6 steps to 4, by using a wet dough and letting time do the work.  ATK changed the hydration rate from 85% to 70%.  Instead of using a dip-sweep method of measuring, better results were obtained by weighing the flour.  The success of the recipe hinges on using the correct ratio of flour to liquids.  Instead of just water, ATK added some beer, which they found improved the flavor of the finished bread.

This was the easiest -- and by far the best -- rustic bread I’ve ever made.  It would easily stand up to the best bakery’s rustic loaf.

I stumbled upon your lovely blog via Pinterest and I must say, I'm so glad I did.

I'm not much of a baker but if I were, I sure would love to bake this heavenly bread.

Thank you so much for sharing...

in my opinion, a fresh baked loaf of bread is just as good as chocolate, anyday! YUM!

I am not a baker and my previous attempts at making bread have been embarrassing. But after a year of giving up, on a whim yesterday, Sunday morning, I thought I'd try it one more time. If I failed again, I was done. Finito.

My first mistake was using the "original" no-knead recipe from NYT (2008). Something seemed wrong--the dough was super wet but I was afraid to use too much flour. So after the first attempt, I immediately searched for AKT's version. Based on AKT's results and their reasons to "fix" the original no-knead recipe, I was compelled to give it a go. But I don't have a AKT/CI membership so for the time being, I cheated and looked for someone who covered it and didn't charge for imparting the knowledge and sharing the wisdom. (I do plan on buying a membership b/c AKT serves a three-pronged purpose: education, scientific methods, and entertainment!)

And voila! I found yours. This too different to modify the first recipe so I thought I'd experiment here and do my own trial to see which bread came out better.

The one thing that was a bit frustrating was your use of the US measurement--ounce--rather than the traditional cooking measurement of cup. While I can certainly do the math to convert to the metric milliliters (ml), my basic measuring equipment is in baker's mode: cup, tsp, tbsp.

Other than that minor complaint of crossing between a mathematical and kitchen-practical conversion, EVERYTHING else went well. In fact, better than I ever imagined.

After 18hours of rising both bread dough, I began with your version. No problems, it was smooth (as I jumped back and forth between the dough and my MAC to make sure I didn't screw something up).

Holy smokes! The NYT dough version was a freaking mess! It was so wet that I actually ended up using about another 1/2 cup of flour just to keep it from sticking to everything it touched.

I deliberately didn't use olive oil when I set it to rise b/c the original recipe didn't say to use it. My trial was to test the results from the recipe VERBATIM, not to improvise so as to corrupt the results. A third of the dough stuck to the plastic wrap, then to my fingers, then to the board, no matter how much flour I used. I almost threw the wet mass into the rubbish.

So b/c of this delay, I couldn't bake them at the same time as I had hoped to save time and be efficient. But never you mind--it didn't matter.

My attempt with your version came out looking like the kind you buy in the freaking bakery!!! And I took your advice about waiting 2 hours which took all the strength I had b/c I'm not very patient (which is probably why I can't bake) and oh my, it was sooo yummy. I've taken pictures of it like it's my firstborn. Well, it is technically my first born bread of this kind. I think the term “hockey pucks” was generally how we described last year's attempts). I cannot wait to show my hubby and let him taste it. I've already eaten two slices and had to leave the kitchen for fear I'd eat the whole loaf. Not hard to do which anyone who's ever had warm, fresh baked bread can tell you.

The NYT version....well, not so much. It's not as bad as it looked like it would turn out but it's certainly not like yours/mine. Believe it or not, as much as I had to manhandle that thing to keep it from attaching to everything it came in contact with, it rose okay. It's a bit softer/wetter/more doughy but rather than trying to correct it by reheating the oven, I figure we can toast it to make up for it.

Thank you for giving this hapless, hopeless pre-amateur breadmaker some confidence.

Dinosaur Shugar, Thank you so much for taking the time to write such a detailed comment on your baking experience. Since I've posted about this scrumptious bread, I've given up bread and other high-glycemic foods because of a pre-diabetes condition that has worsened. Your comment brought to mind the deliciousness of that warm bread slathered with butter, a treat that I can no longer enjoy.

I cant wait to try this recipe. I have often used Jim Lahey, "My Bread" recipe. It always seems to work up differently-wetter dough one time, dryer dough another, but the bread always comes our delicious.
My gripe with America Test Kitchen, Cooks Illustrated, etc, is that you have to subscribe to them to get a recipe, and by that, subscribe to each sub division. I just find them very greedy. You don't have to do this to other food sites. And also, if you buy one book from then, they start sending you more books, like the book clubs of yesterday.

Thanks for posting this recipe.

Hi, Kathy, I know you'll enjoy this bread -- I certainly did. About ATK: they do have some outstanding recipes, but they don't have the last word on food. There are plenty of resources out there, and I have also found that some of their recipes need tweaking too -- like their blueberry pie which I made better.

This was my first loaf of bread and it was SO GOOD. Thank you for posting it. This has inspired me to make more breads.

Hi, Jackson, Thanks so much for your comment. I enjoyed making and eating this bread, but unfortunately, I've been gluten free for about 2 years now. Boy would I love a piece of that warm bread slathered with dairy butter that's also taboo for me. I could try to make a gluten-free version but because I'm diabetic I need to severely ration carbs. Well, that's life, hope you enjoy what's yours now, because stuff changes!

I am not a beer drinker. I'd I froze the leftovers, could I use it in a future recipe?

Hi Morana, Since I've never tried to freeze beer, I can't honestly say what the end result would be, other than it probably would lose its fizz. You can either experiment with freezing the leftovers in 3 oz. portions, or an easier solution would be to just use all water (7 oz. + 3 oz. = 10 oz. total of water instead of part water part beer). There will be a slight change in flavor but you might not mind since the original recipe did not call for beer at all. Good luck and feel free to come back and let us all know what you decided to do and how it worked out.