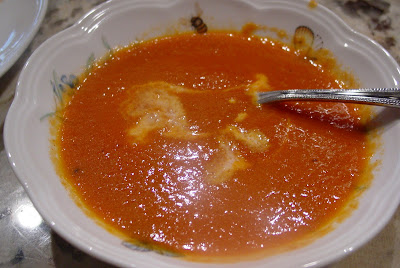 I love it when produce is on a fire sale. Our local Harris Teeter had large red peppers for 99 cents last week. Thanks to Debbie Meyer green bags, six red peppers will last me for several weeks. I roasted 2 of them yesterday so I could make this soup and have some left over for sandwiches. This recipe comes courtesy of Sunset magazine, and was posted on myrecipes.com with stellar reviews. 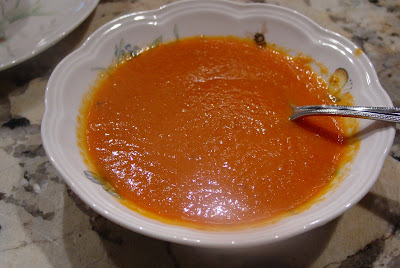 I followed the recipe pretty closely, just reducing the tomatoes a bit, increasing the peppers and topping off my soup with a drizzle of fat-free half and half; Guy said he wanted his soup straight up. We both enjoyed this soup. It's not my favorite roasted red pepper soup recipe, but it was very enjoyable and I might make it again sometime; that is, if I run out of other recipes to try.

To roast the red peppers: preheat broiler or charcoal grill. Cut the peppers in half. Place in a baking pan and broil, skin side up, 4-5" from heat (or place directly on grill, skin side down) until skins are black and blistered, about 5-8 minutes. Place peppers in a paper bag or in a bowl with plastic wrap over it. Let cool 10-15 minutes. Peel the peppers and chop coarsely, reserving juices.

In a medium pan over medium heat, add the oil and onion; stir often until onion is soft, about 5 minutes. Add garlic and stir until translucent, 1-2 minutes. Add peppers, tomatoes, juices, and paprika. Bring to a low simmer and cook, stirring occasionally, about 3 minutes.

In a blender or food processor, puree the soup until smooth. Return to pan and stir in broth and lemon juice. Stir over medium heat until hot. Taste to adjust seasonings, adding salt and pepper as needed. Ladle into cups or bowls and garnish as desired. (Can be made up to 3 days ahead. Store airtight in fridge. Reheat before serving.) Yield: 2 large servings or 4 smaller servings
Posted by Judy at 12:48 PM